Posted on 22 September 2019 by yorkshirecrafter

This dress is a lot bolder in colour than I would usually wear. I was seduced by a market stall selling African wax prints, and this was by no means the boldest design. In fact it was one of the few with only two main colours in it. Until I saw the 2016 edition of the Great British Sewing Bee (GBSB) in which the contestants tackled Ankara fabric, I would never have thought of sewing with it, but that episode demonstrated that these large, exuberant prints can look great in a modern, western style as well as the traditional, West African be-peplummed dresses and head wraps – which, let’s face it, would look ridiculous on a white woman in Yorkshire. 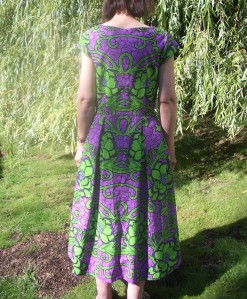 I took advantage of the fact that, being a dyed, batik fabric, the underside is indistinguishable from the face side. This meant that, even though the fabric design has no axis of symmetry, I could create one to give a symmetrical back to the dress by cutting the left side of the back bodice and skirt with the fabric one side up and the right half the other side up. The front bodice and skirt, being in a single piece each, are necessarily unsymmetrical.

The pattern I used was published in Prima Magazine in August 2016 called simply Dress for All Ages – it contains a separate girl’s dress too. Bearing in mind that this was published only a few weeks after the GBSB Ankara episode, I wonder if anyone else has used it with an African wax print? It calls for 140cm wide fabric, but my 111cm cotton (after pre-shrinking) was enough for the smaller sizes and even allowed me to widen the skirt by a total of 12cm (almost 5”) to make it look more generous, as well as lengthening it to below knee level. I used the extra width to add a pleat near to the side seam in each quarter of the skirt, adjusting the existing double pleats so that all three were now 6cm instead of a double pleat of 7.5cm. This has given me the full-skirted, 50s-style shape I wanted without the bulk of a gathered waist.

The neckline was supposed to be faced, but the older I get, the less tolerant I am of flappy facings. You almost never see them on a purchased garment. They are a pain when it comes to ironing as well as having a tendency to slide into view during wear despite understitching and being firmly anchored at the seams. I’m particularly unhappy with faced V-necks because it’s impossible to stitch down the facing at the point of the V without it showing, and consequently putting on such a garment requires a lot of fiddling about to get it lying smoothly where it ought to be.

Instead of a facing, I’ve bound the neckline with plain black fabric. I planned to do it in such a way that it showed on the outside to leave a visible trim, but when I was sitting in good light to hand sew it down on the inside, I realised to my horror that the black bias binding I’d made was not at all the same black as in the batik fabric. Can you see the difference? 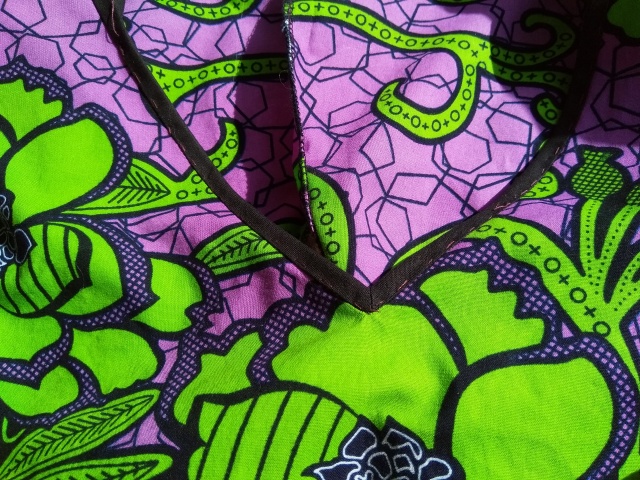 In fact, I think the wax print may be a very dark navy. So off came the binding and I had to cut a new strip (I’d already trimmed it at the bottom of the V) and turn it to the inside instead.

I have more than 2 metres of fabric left from the original 6 yard length, as well as several large scraps that would make a collar, cuff or other small garment piece. I’m thinking that I might make a matching edge-to-edge, collarless jacket with bracelet-length sleeves to wear over the dress when the weather is doubtful. (That’s most of the summer in these parts.) It could be reversible, with plain fabric on one side. I’ve put a scrap of the wax print in the bottom of my handbag in the hope that I may happen across a plain cotton in the perfect shade of green or violet. Failing that, it’ll have to be dark navy.

For anyone wanting to try African wax prints for themselves, I’ve discovered from a former Meltham resident that there is a supplier of the genuine article here in Yorkshire, the African Fabric Shop. They sell mainly online, but have regular open days at their Meltham premises and will see customers at other times if they ring to make arrangements in advance. They stock lots of other traditional African fabrics too, as well as different goodies like buttons, beads and baskets, all sourced by the shop owners in Africa. And no, I don’t have any affiliation whatsoever with them, just a personal recommendation from someone who used to live nearby.

I live and work in West Yorkshire.  I've always enjoyed crafts of all types, from woodwork to lace-making.  I also enjoy anything mathematical, which makes knitting a favourite pastime, especially complicated designs.  I've been advising businesses and industry on environmental matters for 30 years and also have an interest in green living, especially where it saves me money. I live with my husband and our Maine Coon in a 100-year-old cottage that constantly needs something doing to it.  Fortunately, I enjoy DIY too.
View all posts by yorkshirecrafter →
This entry was posted in sewing and tagged African batik, dress, Dutch wax. Bookmark the permalink.