Posted on 30 June 2019 by yorkshirecrafter

In 2016 I went to the British Wool Show near York – it’s on again in August – and came home with two skeins of Araucania’s Botany Lace merino in mottled shades of orange. Despite the name, this isn’t a laceweight (ie 2-ply) yarn, but a fairly skinny 4-ply. Realising that 200g wasn’t enough for a jumper, I acquired some gunmetal grey yarn to go with it and dug out the remains of a ball of orange sock yarn, then set about knitting a top-down sweater in three colours based on a Knitty design called Saint Rémy. It will hopefully look like this when it’s done. 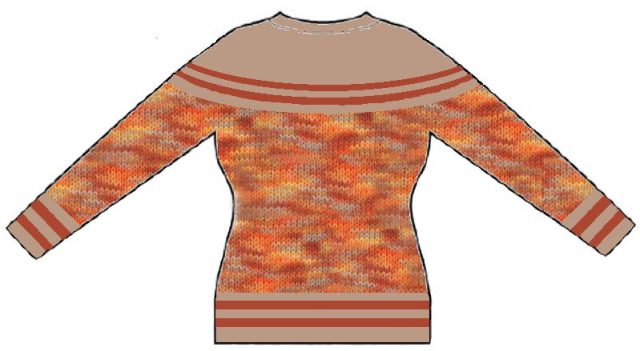 All was going well until some way beyond the armhole split. I stopped knitting the body after a few inches and started on the sleeves, so that I’d know how much yarn I had left for the body without the sleeves being too short. Half way down the first sleeve I spotted a mistake in the yoke and lost my knitting mojo because I couldn’t decide whether it was worth pulling out several hours of work to correct it. Can you spot it?* 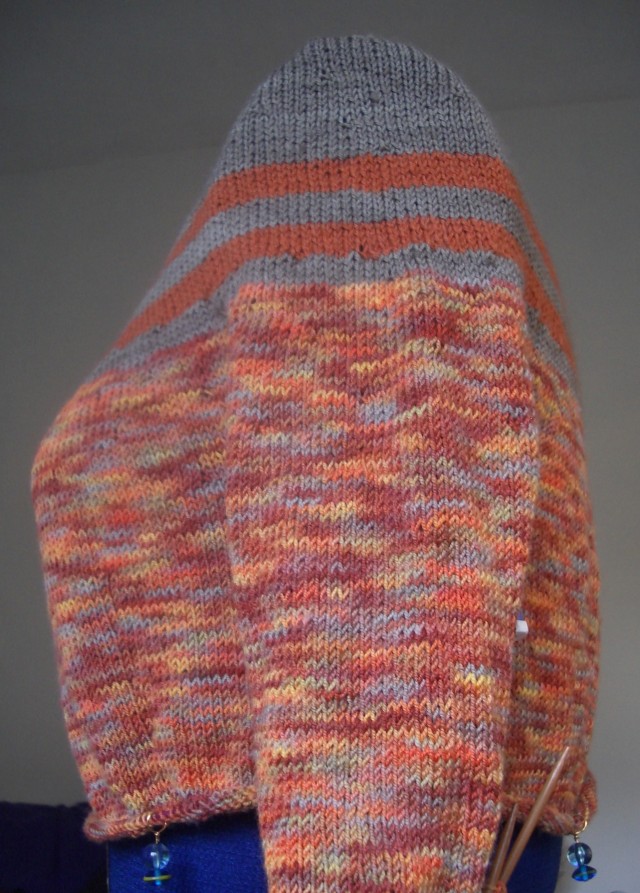 Getting on for three years later, I have returned to this work-in-progress and brought it out of hibernation. I took it along to my knitting group the other day and was persuaded that the mistake in the stripes wasn’t noticeable, but advised that I should repeat it anyway in future stripes so that it will look deliberate. So that is what I’m doing. If the uneven stripes look both glaringly obvious and odd in the finished garment I will just have to cut a few threads, knit the necessary extra rows and then graft the yoke, cuffs and welt back together again. Taking such action holds no fear for me after lengthening a linen jumper last summer.

My swift has reached a usable state, but I have still to make it look pretty by staining it, varnishing it or whatever.

I realised that it doesn’t need the four central pegs that the virtual swift has, just one at each corner. And it would be better if those corner pegs were a couple of inches in from the tips of the battens, to allow space for the yarn. I could move them, but then there would be holes.

The swift does work like this, as long as I stretch it out so that the skein is held fairly tightly and won’t slip off.

I made the base from a thick, heavy piece of plywood to give stability and remove the need for a clamp to fix the swift to the table. Actually, it would fold up rather smaller if it only had a small base with an arm sticking out to take a clamp, and I would probably do that if I made another one.

This was such an easy, quick project. I cut the expanding “coat rack” rotor from thin plywood, but it could be made even more quickly from a length of hardwood batten.  Apart from the wood, all that’s needed is a few nuts, bolts and washers and a fidget spinner bearing. It makes the task of winding a hank of yarn into a ball so much easier.

All I need now is to make a ball winder to go with it.

* The lower grey stripe is only 4 rounds, not 5 like the other stripes.

I live and work in West Yorkshire.  I've always enjoyed crafts of all types, from woodwork to lace-making.  I also enjoy anything mathematical, which makes knitting a favourite pastime, especially complicated designs.  I've been advising businesses and industry on environmental matters for 30 years and also have an interest in green living, especially where it saves me money. I live with my husband and our Maine Coon in a 100-year-old cottage that constantly needs something doing to it.  Fortunately, I enjoy DIY too.
View all posts by yorkshirecrafter →
This entry was posted in knitting, woodwork and tagged Botany Lace, Knitty, Saint Remy, yarn swift. Bookmark the permalink.