Posted on 10 June 2019 by yorkshirecrafter

We’re just back from a cycling holiday in the Kurzeme region of Latvia. It was blessedly flat, mostly cool and occasionally damp, and we saw an awful lot of pine trees.

We started and ended in the capital, Riga, which was hot and wonderfully quiet in the mediaeval centre – the tourist season hasn’t really got started yet. This was the cathedral square in the heart of the city last Wednesday afternoon. 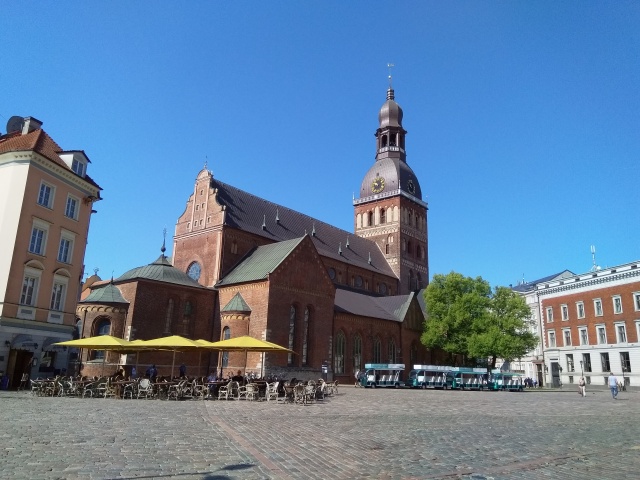 While on the trip, I was idly leafing through a map obtained from Tourist Info to see what the following day’s ride had in store for us when I spotted there was a yarn producer not far from where we were headed. It’s called Pāces vilnas fabrika, it opened in 1892 and it’s the only near-vertical woollen mill in Latvia, ie fleeces come in at one end and dyed, woollen-spun yarn goes out the other. (For a true vertical mill, the yarn would have to be woven into cloth.) Better still, it sells yarn direct to the public, although it appears that guided tours are no longer offered. That didn’t bother me as I’ve been round many a West Yorkshire mill when I worked in the textile industry, although I would have liked to see the raw wool scouring side of the operation as this plant apparently uses none of the usual detergent- and bleach-based scouring chemicals, just water and salt. 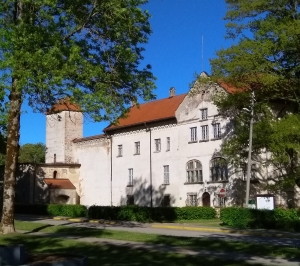 I persuaded my dear, long-suffering husband that we ought to divert to the tiny village of Pāce on our way to nearby Dundaga, where we’d booked into a 13th Century castle for the night. (Not as grand as it sounds – said castle is more of a B&B than a hotel, with inexpensive rooms that, if ours was anything to go by, smell like the drains are indeed several hundred years old.)  I sold it to him as a heritage tourism experience, definitely not retail therapy at all.

To get to Pāce involved riding for 18km or so on unmetalled forest trails. We could have stayed on the road to Dundaga and then continued, still on tarmac, to Pāce, but the more direct route appealed. It turned out to be one of the best parts of the holiday because we were so deep in the pine forest that we saw lots of wildlife and no vehicles other than occasional logging trucks – which was actually quite encouraging, because we knew if they could get through then we definitely could on our bicycles.

At the woollen mill, there was no obvious way in. No reception, no factory shop, no bell to ring, no sign telling visitors where to go, nothing.  Just a large door which, judging from the sound emanating from it, led to the carding room. We were just debating whether to boldly march in there when we spotted a workman strolling across the yard. He didn’t speak English or German, but when I said “wool” in Latvian (a word I had taken the trouble to learn), he led us through the door and up a flight of stairs to an office, where a woman who was on the phone gestured to us to sit down.

To cut a long story short, this woman spoke reasonable English and took us through a spinning shed to a couple of rooms where the yarn was laid out, much of it in loose skeins of about 200g piled according to colour on the floor. 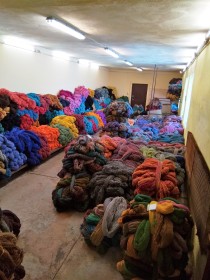 I’d had a quick look at the Dundaga yarns on Ravelry the night before and had decided to concentrate on the mill’s main output, a singles laceweight yarn they call 6/1. I had in mind that I’d buy a single skein of one of their many beautiful multi-coloured options, all of which have long colour changes with very subtle variations from each colour to the next.

After running around excitedly for a few minutes, during which our guide was understandably stealing glances at her watch, I settled on a skein and only then asked the price. “€16 a kilo for the multi-coloured yarn, €13 for the plains”, was the answer. I’d been expecting a far higher price, even allowing for the fact that we were in the middle of nowhere. I quickly decided that instead of buying a single skein that would make a shawl, I needed more, much more of this wonderful, inexpensive yarn. The only problem was, our bike panniers were already pretty full and we’d flown to Riga with Ryanair, an airline infamous for making its passengers conform to its restrictive policies on baggage dimensions and weight with steep penalties for those who don’t.

After a quick chat with my better half, I concluded that five skeins might just be feasible. Worst case, I reckoned I could wear them bandolier-style across my body to smuggle them past the Ryanair boarding gate staff. So I ran around like a kid in a sweet shop for a few minutes more and ended up with this haul: two pairs of multi-coloured yarn and a hank of plain, sugared-almond pink that goes with one of them. The nice lady rounded down the weights when she put the skeins in the scales, and then rounded down the total cost to the nearest Euro too.  I love that place!

We stuffed the yarn on the back racks of our bikes for the remaining 5km to our not-so-palatial accommodation in Dundaga. The day we flew home I wore all three sweaters I’d taken with me to make room for the extra 950g of yarn I’d acquired, and I was glad of them when we landed at Leeds-Bradford late at night to find the temperature in single figures, some 20°C cooler than it had been in Riga that day. 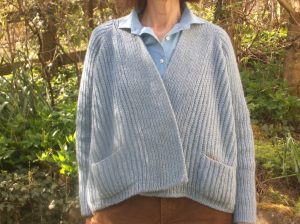 Since getting home I’ve hit Ravelry again to work out what to do with all this yarn. It smells “sheepy” and has little bits of straw still in it – definitely a heritage product that deserves to become a special garment. I chose one of the colourways because it has a pale blue and a beige in it that are very similar to the colours of the Flaum cardigan I recently made. I’d like to knit a sleeveless, or cap-sleeved, top that I can wear under that open cardi on cold days, using the multi-coloured yarn stranded Fair Isle-style with the plain pink. Or possibly stranding the two multi-coloured skeins against each other, with the colours out of sync of course. I can’t find a pattern that’s quite what I want, although one that several others have knitted using Dundaga 6/1 comes close, Maple syrup. I’m going to have to design something myself, I think.

I live and work in West Yorkshire.  I've always enjoyed crafts of all types, from woodwork to lace-making.  I also enjoy anything mathematical, which makes knitting a favourite pastime, especially complicated designs.  I've been advising businesses and industry on environmental matters for 30 years and also have an interest in green living, especially where it saves me money. I live with my husband and our Maine Coon in a 100-year-old cottage that constantly needs something doing to it.  Fortunately, I enjoy DIY too.
View all posts by yorkshirecrafter →
This entry was posted in cycling, knitting, travel and tagged Dundaga, Dundaga wool, Dundaga yarn, Latvia, Pāces vilnas fabrika, Riga, woollen mill. Bookmark the permalink.