Posted on 1 July 2018 by yorkshirecrafter

We are back from our Girona to Toulouse cycle trip. I, my dear husband, our two bikes and our two new bike transportation bags are all, more or less, in one piece, although the bags will need a few repairs before their next outing. And my knees may never recover from crossing the Pyrenees.

Leaving Girona, we were soon on the Pirinexus, a circular cycle route that crosses the Spanish-French border. For the actual border crossing we had a choice of taking a busy modern road, jockeying for position with all the heavy lorries and fast cars, or the Roman road which has monuments built by Pompey at the top of the pass, where the Via Augusta becomes the Via Domitia. Since we had no desire to die a long way from home, we chose the latter. It was one of the roughest, steepest tracks I have ever had the misfortune to walk on, let alone push a luggage-laden bicycle up. I wouldn’t even call it a mule track. The surface was so loose and poor that it was hard to keep your footing and avoid sliding back down the hill. Walking boots would have helped, but they are not conducive to cycling. (And they were back home in Yorkshire.) We survived the experience, but I wouldn’t recommend it.

After the pass it was downhill or flat all the way, but the surfaces were often unmetalled still. We followed the Eurovelo 8 cycle route along the French coast, through wine regions including Banyuls, Rivesaltes, Fitou, Corbières and La Clape, before turning left into the Minervois and taking the towpath along the Canal du Midi towards Toulouse. In total we did over 500km with no worse mishaps than one puncture and one broken brake cable.  Highlights included Figueres, Dalí’s home town: 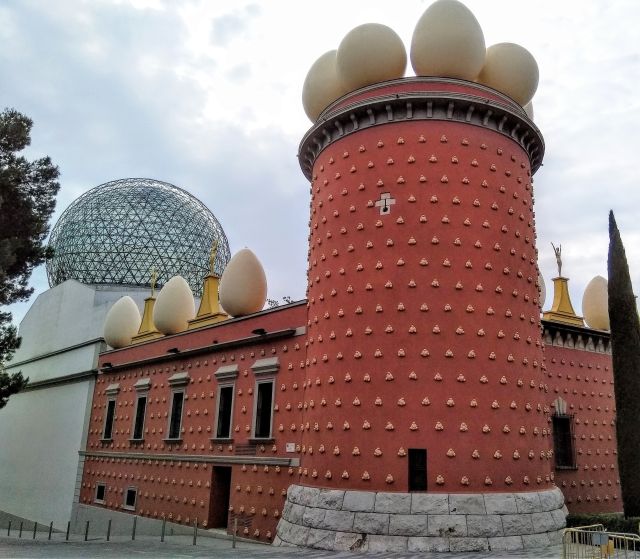 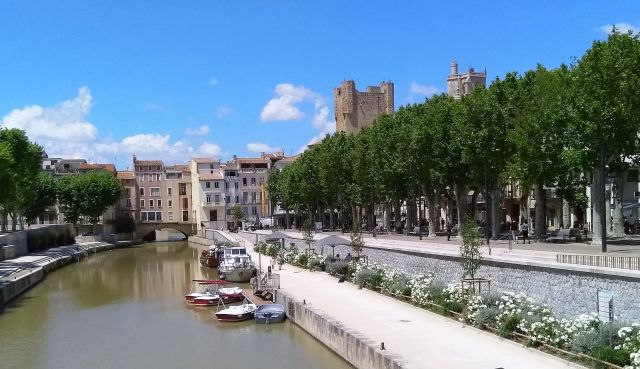 and Minerve, the mediaeval capital of Minervois: 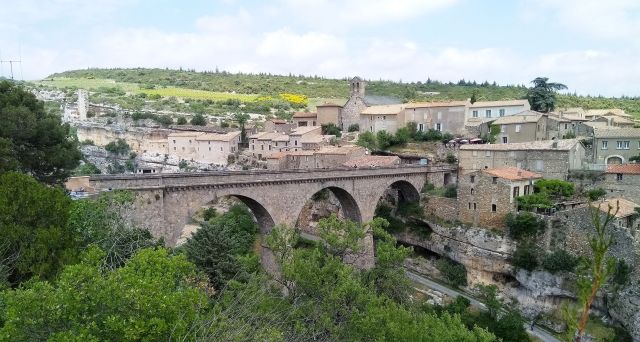 Now we have returned to Blighty to find the country has been enjoying a heatwave for over a week, with no end in sight. Apparently, the fact that the wind is from the east instead of from the Atlantic (as is the norm) means that it is dry. Consequently there’s no chance of a thunderstorm bringing the fine weather to a crashing end, or at least, not yet. Thankfully, the easterly wind is also preventing the smoke from the wildfires on Saddleworth Moor and near Oldham reaching Yorkshire, but our moors are tinder-dry too and it’s probably only a matter of time before we have some major fires on this side of the Pennines.

I live and work in West Yorkshire.  I've always enjoyed crafts of all types, from woodwork to lace-making.  I also enjoy anything mathematical, which makes knitting a favourite pastime, especially complicated designs.  I've been advising businesses and industry on environmental matters for 30 years and also have an interest in green living, especially where it saves me money. I live with my husband and our Maine Coon in a 100-year-old cottage that constantly needs something doing to it.  Fortunately, I enjoy DIY too.
View all posts by yorkshirecrafter →
This entry was posted in cycling, travel and tagged Eurovelo 8, Pirinexus. Bookmark the permalink.

1 Response to In Pompey’s steps