Posted on 22 April 2018 by yorkshirecrafter 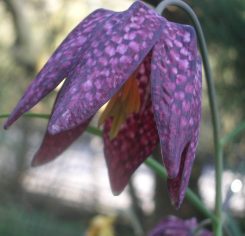 We’ve had four days of fabulous weather this week. It even got up to 23°C on Thursday, a quite extraordinary temperature for Yorkshire in April. Alas, things are back to normal today with rain, wind and temperatures 10 degrees lower, but in the meantime my legs have seen their first sunlight of the year, the lawn has had its first mowing and every plant in the garden that had been held back by the cold weather has bloomed all at once, from daffodils to bluebells. Even the snake’s head fritillaries are out. And the fine weather has meant that I could get on with the test version of the bike transportation bag I’ve been working on. This is it.

As it’s just a trial, I haven’t bothered to attach Velcro to the opening edge, hence the clothes pegs. Nor have I added carrying straps/handles, but they will be probably be attached to the bike itself for strength and emerge through the opening. The bag is made of scraps of ripstop fabric and so has a somewhat patchwork appearance. But as a proof of concept, it works.

There’s a large pocket inside to hold a flattened cardboard carton or two to provide a little protection for the bike. I was afraid it might be difficult to get the cardboard into place, but actually it’s proved to be quite easy: my dear husband lifts the dismantled bike off the ground in its ordinary orientation for a second or two while I slip the bag over its lower half, he then rests it on the ground while we pull the bag up over it, before laying it down on its side to slide the cardboard through the top opening into the internal pocket. The final version of the bag will have a pocket on both sides, but it will be an easy matter to flip the bike onto its other side to slide cardboard into the second pocket. Any spare cardboard can then be stuffed in the bag to protect the more vulnerable parts and those sticky-outy bits that could damage the fabric. Ripstop fabric resists tearing, but it is quite easily punctured.

I’m going to sew the real bags from a heavier ripstop nylon, preferably in black to make them look less home-made. Being able to read the writing on the cardboard boxes through the side of the bag gives the prototype a rather amateurish appearance and I’m aiming for something that appears professional enough to pass muster with airline check-in clerks.

The other project that has advanced this week is Bertie Bunkins. My version of this rabbit toy has had a sex change and she will be wearing striped tights, a blue vest and probably a red dress. One foot and leg is done as well as the head, and I’ve nearly finished the body.

I’m experiencing a version of Second Sock Syndrome because I really, really want to knit an arm before I do the other leg.

While spring-cleaning a cupboard I came across a reel of string-like linen thread that I bought years ago at the late-lamented Texere Yarns  to warp an inkle loom I’d made.  It’s not meant for knitting but I thought I’d give it a go and knitted a swatch. It came off the needles as stiff as a board and very harsh to the touch, but after a couple of turns in the washing machine it has softened considerably and now has enough drape for me to consider using it for a garment. (I was ready to consign it to becoming a beach bag before it was washed.)

I’m thinking maybe a loose, sleeveless top to go over a T-shirt, or even a long-sleeved summer sweater. There might be enough for both as I have over 400g and I’ll need to knit it on bigger-than-usual needles to give it the best chance of draping. The yarn has 22-23 wraps per inch which suggests about a 2-ply, laceweight. That would normally call for somewhere around a 2.5mm needle for plain stocking stitch but I knitted the swatch on 3.25mm and 3.5mm to give a fabric I can live with at 6-7 stitches per inch.

Does anyone have a pattern suggestion?

I live and work in West Yorkshire.  I've always enjoyed crafts of all types, from woodwork to lace-making.  I also enjoy anything mathematical, which makes knitting a favourite pastime, especially complicated designs.  I've been advising businesses and industry on environmental matters for 30 years and also have an interest in green living, especially where it saves me money. I live with my husband and our Maine Coon in a 100-year-old cottage that constantly needs something doing to it.  Fortunately, I enjoy DIY too.
View all posts by yorkshirecrafter →
This entry was posted in cycling, knitting, sewing and tagged Bertie Bunkins, bike transportation bag, linen yarn, rabbit toy. Bookmark the permalink.