Not the rhubarb triangle

Posted on 26 March 2017 by yorkshirecrafter

There’s an area of Yorkshire, to the north of Wakefield, known as the rhubarb triangle.  Unsurprisingly, that’s because this is a centre of rhubarb growing, including early, forced rhubarb in January/February.  But since 2011 there’s been another Yorkshire triangle.

The new triangle was created when an art gallery opened in Wakefield, named after local lass Barbara Hepworth.  It was built to house examples of her sculptures as well as such things as her workbench, plaster maquettes of some of her pieces and various personal possessions from which she drew inspiration, as well as the contents of the previous city art gallery, a townhouse which wasn’t really capable of meeting modern standards of display and conservation.  The Hepworth Wakefield became the third corner of the Yorkshire Sculpture Triangle, together with the Henry Moore Gallery in Leeds and the wonderful West Yorkshire Sculpture Park to the south of Wakefield.  We’ve been meaning to make a trip there ever since, and we finally did a few days ago. 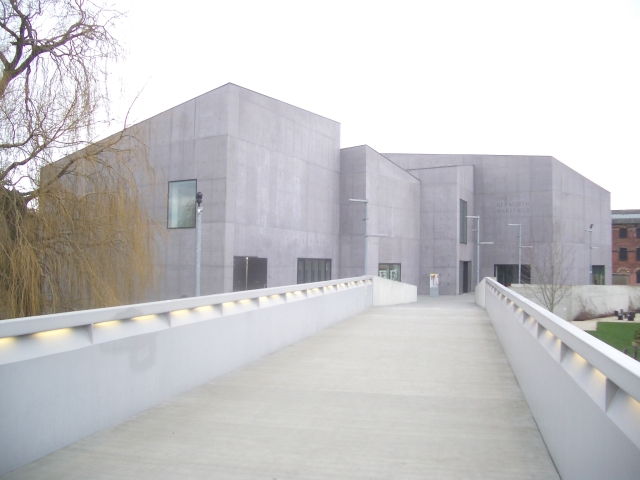 The Calder footbridge leading to the gallery entrance

The building itself is unusual, especially for somewhere like Wakefield which isn’t exactly the avant-garde sort of a place where you’d expect to find a world class museum or gallery.  It was designed via an architectural contest and the winner, David Chipperfield, created a blocky, imposing, poured-in-situ concrete building that sits right in the River Calder – it had to be temporarily diverted with a coffer dam while the foundations were sunk.  River water is used for heating and cooling.

Inside, the rooms benefit from a lot of natural light and are trapezoid in shape but all different, which seems to suit the exhibits.  It reminded me of the Burrell Collection near Glasgow, which is also housed in a stunning purpose-built gallery that shows its contents off to perfection while keeping them in peak condition.

Hepworth was a contemporary of both Henry Moore and Ben Nicholson – she was married to Nicholson for a while – and their works are held in the permanent collection too.  Wakefield Council was canny enough to acquire them when the artists were relative unknowns and their works were still affordable.

There isn’t the space to exhibit more than a small proportion of the collection at once, but I did like this Moore reclining figure, carved by the great man himself in elm.  (Apparently, Hepworth and Moore were unusual for the time in that most sculptors created a small maquette and then outsourced the stone- or wood-carving.)

You can see how he has made use of the wood grain to emphasise various parts of the figure, particularly the shoulder and knee.   In the background is a classic Hepworth sculpture.

The Hepworth Wakefield is definitely worth a visit if you happen to be anywhere nearby, especially as entry is free.  And the café is quite good, which is always a bonus.

I’m feeling ready to fly solo now with my swing knitting experiment, although I still have a lot to learn.  I’ve begun knitting a little triangular shawl – this week’s theme is definitely triangles – to prove that the rules I’m using work when I’m not following a pattern.  So far so good, it’s staying the right shape despite all the curvy short-row sequences.

I’ll knit a little further and then pull out the ghastly yellow and red acrylic and start again with a better yarn.  I fancy using just one yarn in a variegated colour for a subtle effect.

I live and work in West Yorkshire.  I've always enjoyed crafts of all types, from woodwork to lace-making.  I also enjoy anything mathematical, which makes knitting a favourite pastime, especially complicated designs.  I've been advising businesses and industry on environmental matters for 30 years and also have an interest in green living, especially where it saves me money. I live with my husband and our Maine Coon in a 100-year-old cottage that constantly needs something doing to it.  Fortunately, I enjoy DIY too.
View all posts by yorkshirecrafter →
This entry was posted in art, knitting and tagged Barbara Hepworth, Hepworth Wakefield, sculpture, swing knitting, Yorkshire Sculpture Triangle. Bookmark the permalink.