All over bar the crochet

Posted on 27 March 2016 by yorkshirecrafter

All the knitting is done on this Kelmscott cardigan now, and the last two pieces are being blocked – there wasn’t room on my blocking mats to do all six at once.  At this time of year it’s taking a while to dry.  The clocks have gone forward to British Summer Time and Spring has officially started, but nobody told the weather here in Yorkshire and it’s still pretty dull and cool with intermittent hailstorms.  Nice.

I was somewhat apprehensive about immersing the garment pieces in water to soak them for blocking, given that they are knitted from an unconventional, blown-rather-than-spun yarn, Air by Drops.  It’s very soft indeed but also quite strong, thanks to the nylon (polyamide) in the blend.  I keep examining it to see how it is constructed, but the fluffiness doesn’t make that easy.  Drops describe it as a “blow yarn”, and they also do a chunky version called Cloud.  I think it’s probably made by blowing the natural fibres (70% baby alpaca and 7% wool) into a superfine nylon mesh tube which holds the yarn together, a bit like sausage meat in a skin.

The washing instructions say hand wash at 30ºC, which is a pain, especially for such a pale coloured yarn that isn’t going to stay clean for 5 minutes.  I rarely wash things by hand, even my hand knitted garments and machine-made cashmere sweaters, but this cardigan may have to be the exception.  I just don’t know how a “blow yarn” will take to being machine washed.  It may well felt at the drop of a hat.  Indeed, I have joined in new balls of yarn by felting here and there, where I couldn’t easily hide a knot in a seam, like for the collar.  I thought the nylon skin – assuming there is one – might preclude any such felted joins, but it didn’t.  I suppose I could knit a few swatches with my leftover yarn and subject them to some mild laundering maltreatment to see what happens.  It would be a real shame if the cardigan lost its fluffiness after a wash or two.  At present it looks like a very good match for the pattern, which was designed for a merino/angora blend with a pronounced halo.

Once the remaining cardigan pieces are dry, I still have to sew them together and I’m not looking forward to that.  I’ve made mainly one-piece jumpers lately and it’s easy to forget what a chore it is seaming knitted-flat garments.  And after the sewing-up I have to crochet along the front edges of the cardigan, creating button loops as I go.  That’s going to be a challenge because my crocheting heyday was a long time ago, when I was about 10, and it’s been all downhill ever since.  This pattern even calls for crocheted button covers, which may be a step too far.

I cast on for the first Arne & Carlos felted slipper on Good Friday, and it’s already finished.  In the end I chose a Sanquhar pattern called Forge.  It has turned out to be quite subtle in two shades of brown, but I like the effect.  Whether or not the pattern will still be visible after felting remains to be seen. 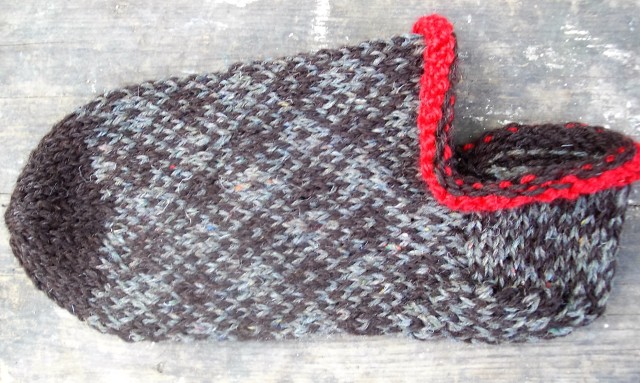 A&C recommend knitting and felting one slipper before starting on the second one, in case it’s a disaster.  I’m not going to do that, it sounds like a recipe for getting different-sized slippers.  I’ll make the second one as well and then put them in the washing machine together.  At least they should both end up the same size that way, even if they are too small.  According to the Scandi designer pair, you just put them on while they are still wet if that happens and they stretch to fit.  I’d rather not have to find out whether that works.

I live and work in West Yorkshire.  I've always enjoyed crafts of all types, from woodwork to lace-making.  I also enjoy anything mathematical, which makes knitting a favourite pastime, especially complicated designs.  I've been advising businesses and industry on environmental matters for 30 years and also have an interest in green living, especially where it saves me money. I live with my husband and our Maine Coon in a 100-year-old cottage that constantly needs something doing to it.  Fortunately, I enjoy DIY too.
View all posts by yorkshirecrafter →
This entry was posted in knitting and tagged Arne and Carlos, blow yarn, Drops Air, felting, Kelmscott cardigan, slipper. Bookmark the permalink.