A smartphone case and the first espadrille sole

Posted on 26 July 2015 by yorkshirecrafter

My dear husband has acquired his first smartphone, quite some years after everyone else. Until now he has used a very basic Nokia (for those who don’t remember that far back, Nokia was the mobile phone manufacturer back in the day) and a Palm PDA. The Palm is nearing the end of its days, hence the decision to join the rest of the 21st Century and acquire a smartphone. After a surprisingly short period of research, he plumped for the 2nd generation Motorola Moto E, a sub-£100 Android phone that packs a lot of punch for the price.

I’m pretty pleased about the Android choice, because I did a MOOC on programming Android devices last year despite not owning one. Until now I’ve had to use an emulator to run my programs and I’m looking forward to having a go on the real thing. In the hope that it will make it more likely that I’ll be allowed to upload my dodgy code onto the new man-toy, I’ve curried favour by making a leather slipcase for it.

I used a rather boring black leather with a slightly waxy finish, but then the phone is boring and black too.  That’s what DH likes.  I have jazzed it up a little with stitching in white linen and white edges.

I used this as an opportunity to practise saddle stitching, the technique of sewing with two needles to create a stich that crosses over inside each hole to make it very secure. The end result isn’t all that neat, saddle stitching is definitely one of those skills that is easy to learn but takes an age to master.

I found time earlier in the week to continue with my espadrille experiment. The first sole is finished but I still need to make enough cord for the second one.

As well as being a rather irregular shape, the sole is a little floppier than I was hoping for. Perhaps there’s a good reason why the cord is traditionally made by plaiting twine, not the I-cord I have used. I might try that with a second pair.

And an (almost) finished cardi 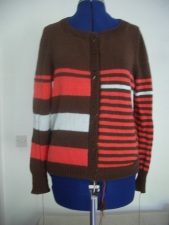 I have at last finished knitting my Stripes Gone Crazy cardigan. I lengthened the welt because the 10 rows of ribbing that the pattern called for looked unbalanced against the long cuffs I need to reach my wrists.

Just a zillion ends to darn in now, and then I can block it. I have found some buttons in my button box that will just about do as a temporary solution until I can get to a decent button shop.

I live and work in West Yorkshire.  I've always enjoyed crafts of all types, from woodwork to lace-making.  I also enjoy anything mathematical, which makes knitting a favourite pastime, especially complicated designs.  I've been advising businesses and industry on environmental matters for 30 years and also have an interest in green living, especially where it saves me money. I live with my husband and our Maine Coon in a 100-year-old cottage that constantly needs something doing to it.  Fortunately, I enjoy DIY too.
View all posts by yorkshirecrafter →
This entry was posted in knitting, leatherwork and tagged espadrille, leather, Moto E, saddle stitching, Stripes Gone Crazy. Bookmark the permalink.

1 Response to A smartphone case and the first espadrille sole