Posted on 30 March 2015 by yorkshirecrafter

I may have bitten off more than I can chew. Full of the enthusiasms of spring after the recent vernal equinox and the start of British Summer Time, I’ve embarked on an electronics MOOC. I was hoping to learn what I need to build a motor controller for an electrical spinning machine, but the course so far is more theoretical than practical. I’m beginning to remember why I disliked electronics as an engineering undergraduate. There’s a lot of memorising circuit diagrams and expressions (or their derivations, which is worse) and a fair bit of calculus, which didn’t seem so bad when I was 19 but is now stretching my maths to breaking point. It’s been a few years since I’ve had to integrate anything and it’s taking a while for the rusty skills to come back. Not sure yet whether this MOOC will be of any real use, but I’m a finisher so I will persevere to the end or die in the attempt.

As if that weren’t enough, I’ve started speaking to a nice Spanish lady via Skype twice a week. We chatter away for an hour, taking it in turns to speak in Spanish and English and correct each other’s mistakes. I’m not used to speaking in a foreign language for more than a sentence or two – at most a haltingly slow five minute conversation with someone I meet at a railway station or behind the desk in a tourist information office – and I’m finding an hour’s on/off Spanish quite exhausting. The object of the exercise, for me, is to get my Spanish into gear before we go off to Rioja in the autumn to buy some wine. I’d like to be able to converse properly with the wine-makers, something I can just about manage in French, but I struggle in other languages, including Spanish. I’ve been following the advice of Benny Lewis as given in his Fluent in 3 Months website and the accompanying book. One of his main tips is just to speak regularly with a native speaker, hence my twice-weekly Skype sessions.

All of this autodidactism has meant that I haven’t got much knitting done lately, or anything else crafty. My Ginkgo Crescent shawlette remains at the “nearly done” stage, having been ripped back by a number of rows at one point. Being a thrifty sort of person (or mean, if you prefer), I’m trying to use up all of the yarn by working an extra quarter repeat of the pattern. The result is that my “leaves” end up going the opposite way to the leaves in the as-written pattern, and the shawl is wider at the edges because every repeat adds a few stitches. The final pattern row is different from all the preceding ones and creates the tips of the leaves. These tips can then be made pointy during blocking, so this final row is quite critical to the look of the finished piece and must be reversed to suit the direction of my leaves. I can reverse the lace pattern over the 15 stitch pattern repeat with no problem, but working out what extra patterning I need in the additional edge stitches is a challenge. After much thought I will just try something and see if it works.

With needles shortly to become empty, my mind turned to the next knitting project. Another shawl, Color [sic] Affection, has caught my eye. It is striped and very dramatic, worked in 3 colours of 4 ply (fingering) or 2 ply (laceweight) yarn. I spent a few days mulling over which cotton or cotton-blend yarn would be best for it and thinking that it was going to turn out quite expensive because of the need for at least 3 and possibly as many as 6 balls of yarn. Then, by sheer chance, I was browsing in a junk shop the Saturday before last when I spotted a few balls of yarn in a basket. I picked up one to have a look, saw it was cheap acrylic and put it down, but the shopkeeper noticed and told me she had more yarn behind the counter. She showed me Patons 100% mercerised cotton 4-ply in seven or eight colours and only wanted £1 a ball for it. Yippee! There’s enough in each ball for one of each colour to be sufficient for Color Affection, so I bought 3 shades of blue and I will have my shawl for the bargain price of £3.

Some kind person has put a sketch of the Color Affection stripes on the web so that would-be CA knitters can play around with colour combinations before launching into it. I have done exactly that. Which of the 6 possibilities looks best? All suggestions gratefully received, because I can’t decide.

I was so delighted with finding this yarn that I told every knitter I know about it and there’s been quite a run on the shop in the last few days. Expect to see a lot of mercerised cotton knitwear in these parts this summer. Before it all sold out I went back and bought some more. I knew I’d seen a cardigan pattern that would suit it, and after a little digging around on Ravelry I found, and bought, Stripes Gone Crazy.

I just love it, it’s mad. Narrow stripes on one side of the front widen and dip downwards as they go around, coming out as wide stripes on the other front.  I reckon it will need 5 balls of the Patons cotton, 3 in the main colour and 2 in a contrast, but I have only bought 3 of the chocolate brown and one of the peachy red. I will put in one or two stripes in one of the pale blues left over from the shawl, that’s the plan. So the shawl will have to be made first.  It’s going to be a stripy summer!

What last century’s babies were wearing

I daren’t cast on for another shawl while I still have one on the go, much as I’d like to, but I do need to have something simple and portable to take to my knitting group. I thought I’d knit something for a baby because a) it’ll be quick, and b) it’s useful to have a baby garment waiting in the wings for the next time a friend says she’s about to become a mother (or grandmother).

I have quite a collection of baby yarn because I can never seem to find it when it’s needed and I end up buying a whole new ball even if I’m just knitting bootees. But I stumbled across a bag of remains on top of a wardrobe and there’s an almost complete ball of white DK that will make a matinee jacket. I even have a pattern for one, probably bought when my first nephew was born – he’s in his 30s now.

I don’t much like the waffle stitch pattern so I’m substituting a daisy stitch that involves knitting down into the stitch 3 rows below. It’s a bit of a fiddle, but you soon get used to it. 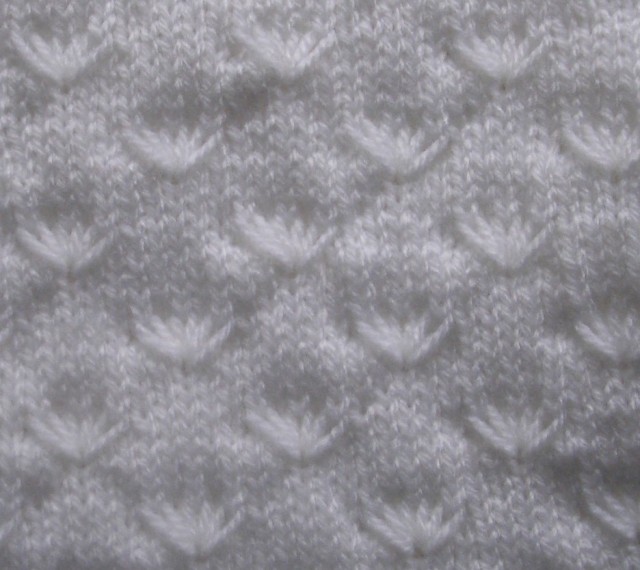 I’m not at all sure anyone dresses babies in matinee jackets any more, but what the heck, they look sweet. This one has an extraordinary number of steps for such a small garment: knit the back, 2 fronts, 2 sleeves (all separately), then put them together and knit the yoke, followed by front opening bands (sewn on) and a collar (also sewn on). If I’d stopped to think about it before casting on I’d have knitted it in one piece up to the armholes.

I live and work in West Yorkshire.  I've always enjoyed crafts of all types, from woodwork to lace-making.  I also enjoy anything mathematical, which makes knitting a favourite pastime, especially complicated designs.  I've been advising businesses and industry on environmental matters for 30 years and also have an interest in green living, especially where it saves me money. I live with my husband and our Maine Coon in a 100-year-old cottage that constantly needs something doing to it.  Fortunately, I enjoy DIY too.
View all posts by yorkshirecrafter →
This entry was posted in knitting, learning and tagged Color Affection, Fluent in 3 Months, Ginkgo Crescent, matinee jacket, MOOC, Stripes Gone Crazy. Bookmark the permalink.