Posted on 6 July 2014 by yorkshirecrafter

After all the excitement and preparation, the world’s largest annual sporting event has now been and gone as far as God’s Own County is concerned. We watched Stage 1 of the Tour de France yesterday from a friend’s house on the route in Otley and had a perfect view of the whole cavalcade.

It started with the “caravan” of sponsors’ promotional vehicles, from which sweets and other small gifts were thrown to the crowds lining the roads. 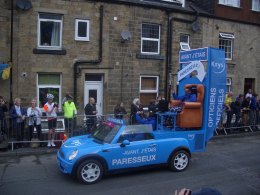 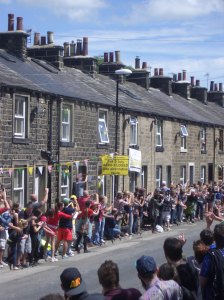 Then, after a wait while we watched the ceremonial ride from Leeds to Harewood and the start of the race proper on television, we saw the helicopter following the lead riders approach.

Shortly afterwards, they whizzed past in (almost) the blink of an eyelid, already a couple of minutes clear of the peleton after racing for just 9km. 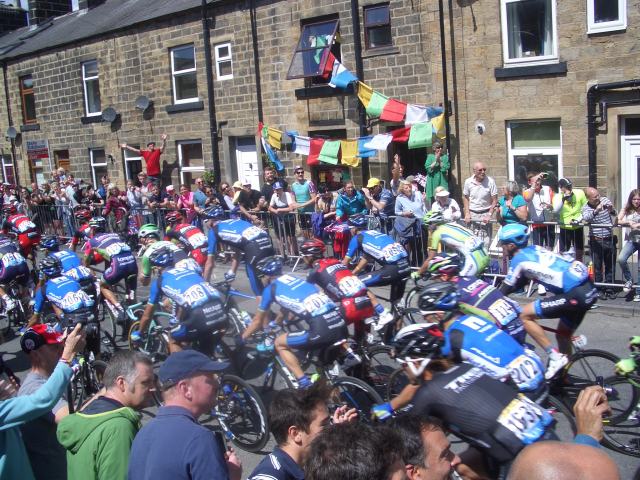 After watching the peleton and a few stragglers, everyone wandered off to follow the rest of the race on the giant screens that had been installed around the town, and a real party atmosphere prevailed. This was particularly evident in the market square which was thronged with people enjoying the sunshine and drinking beer from the surrounding pubs while watching the outdoor screen and laughing at the French translations of local place names such as Côte de Buttertubs. 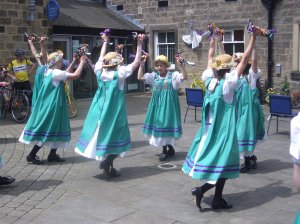 One of Otley’s five Morris dancing troupes, the Buttercross Belles, were strutting their stuff.

Road closures had turned the centre of town into a pedestrian and bike-only space, allowing room for market stalls and “music pods”. All the pubs (and Otley has many) have been temporarily re-named in French; Le Manoir and Le Cheval Noir are easy, but if someone asked you to meet them for a drink at Le Toison would you know to head in the direction of The Fleece?

We were able to stroll around and marvel at the crowds, both on the TV screens and in the flesh. For Yorkshire, this was a far bigger event than the Queen’s diamond jubilee and the Olympics in 2012. I can’t remember anything that has received such universal support, which certainly wasn’t limited to cycling fans. There were few stretches of the 126 mile route where no spectators could be seen, and in the towns and villages they lined the streets two and three deep. The BBC’s estimate this morning is that over a million people lined the Stage 1 route, and judging from the TV pictures of today’s Stage 2 from York to Sheffield the level of support has been similar there.

The road closures and lack of parking places made travel by car difficult, but it seemed that almost everyone had walked or cycled into town, or to their selected viewing spot elsewhere on the route. From early in the morning, a steady stream of people could be seen heading on foot for the best sites in the Dales, many of which are very remote.

A rumour I heard earlier in the week that the Prime Minister was going to watch the Tour in Ilkley turned out to be unfounded when he popped up at the finishing line in Harrogate instead. Actually, most people were more interested in another David, Beckham, who had (allegedly) been spotted in Betty’s Tearoom. News travels fast in Ilkley. The local cycling club has achieved a great deal of national publicity from the Tour. It is the largest in the UK with well over 1,000 members, quite extraordinary for a town with a population of just 15,000 or so, particularly as the club was only re-established in 2011 after a break of several decades. Also extraordinary is the fact that 40% of the membership is female, much higher than most cycling clubs, thanks to an inclusive membership policy that welcomes everyone, no matter what they ride or what sort of cyclist they are. Good on them, I say.

Now the collective madness is over, tomorrow is a working day and we can all get back to normal – if you ignore the Great Yorkshire Show, which is about to start. The sheep that have been dyed yellow will take time to fade, as will the bicycle outlines and messages of welcome painted on our green hillsides.   Miles of bunting will have to be taken down from lamp posts and all the yellow-painted bicycles returned to the skips they were rescued from, but Le Tour de France 2014 will not be forgotten in this part of the world until everyone who was here this weekend is dead.  And with a worldwide television audience for the event of an unbelievable 3.5 billion people, the coverage of the Dales, looking at their glorious best in the summer sunshine, will have done wonders for the local tourist industry.

I live and work in West Yorkshire.  I've always enjoyed crafts of all types, from woodwork to lace-making.  I also enjoy anything mathematical, which makes knitting a favourite pastime, especially complicated designs.  I've been advising businesses and industry on environmental matters for 30 years and also have an interest in green living, especially where it saves me money. I live with my husband and our Maine Coon in a 100-year-old cottage that constantly needs something doing to it.  Fortunately, I enjoy DIY too.
View all posts by yorkshirecrafter →
This entry was posted in Tour de France and tagged tour de france. Bookmark the permalink.